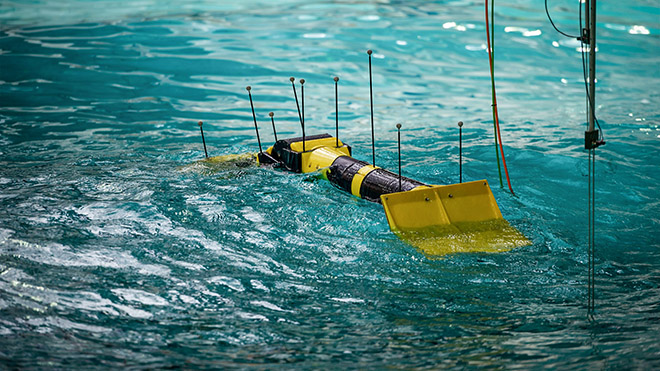 How does it work?

Our wave energy converter comprises two hulls connected by a hinge and moored to the seabed. Waves cause the hulls to flex about the hinge driving an internal generator

What makes Mocean Energy’s design unique is the shape of the hulls. The sloped channels on the front and rear increase wave forces and change the body dynamics so that the machine responds resonantly over a broad spectrum of waves yet dives through steep waves to reduce unwanted loads.

This design has been developed by Mocean founders Cameron McNatt and Chris Retzler using computational optimisation and rigorous tank testing at the University of Edinburgh’s world-leading ocean energy test facilities.

Mocean hull geometries have sloped channels that extend from each end, which:

The sloped submerged sections greatly improve survivability in storm conditions. They lower the centre of gravity, which makes the device more stable. In extreme seas, the nose causes the machine to dive through large waves (like a surfer swimming out to sea), rather than being lifted out the water and then slamming on re-entry.

Our design is mechanically simple, consisting of two bodies moving about a single two-dimensional joint, which means there will be fewer parts that could fail.

The structure and the generators are one of the most significant costs of any wave energy machine. The design means that it absorbs at least twice as much power for a given size than a traditional hinged-raft converter and its resonant response means that required generator torques are lower. More power is absorbed for a given amount of structural material and generator rating, which lowers the cost of energy.