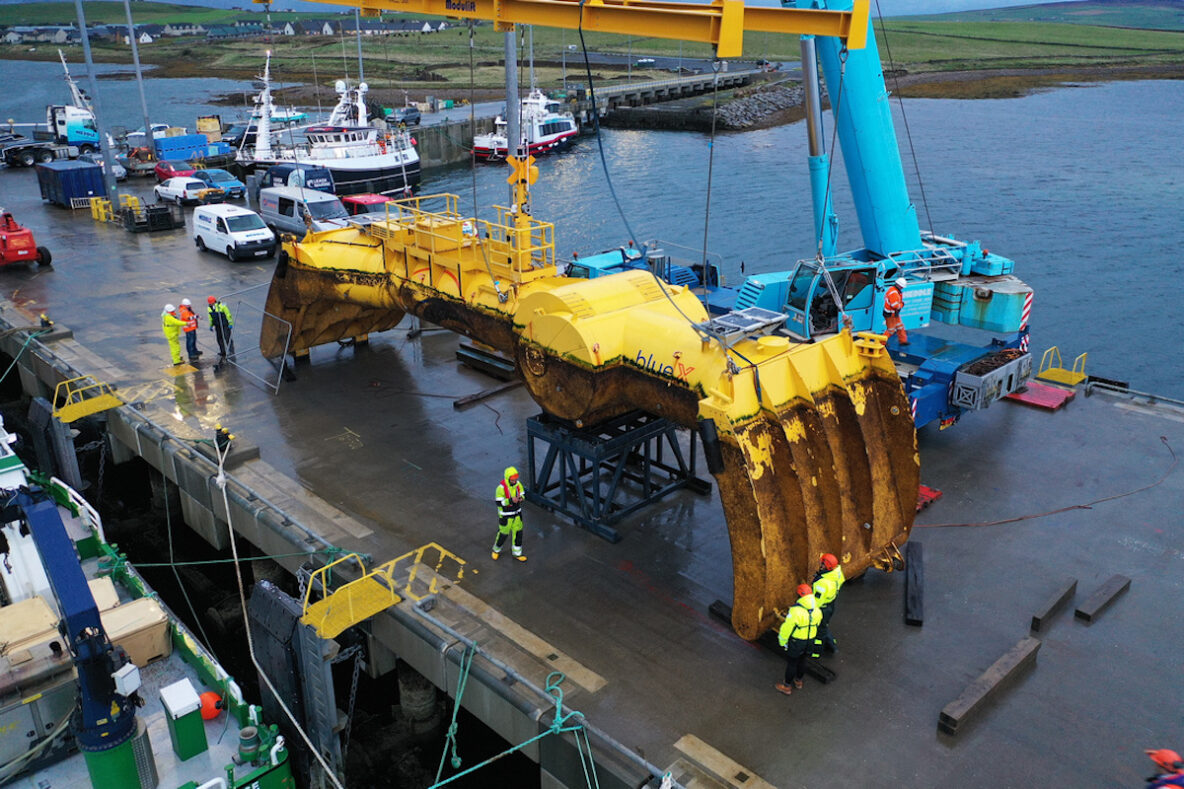 In the last few days the 20-metre long, 38-tonne wave machine has been towed from EMEC’s Scapa Flow test site to Kirkwall and has been lifted onto Hatston Pier, where it will be cleaned, inspected, and maintained until next year’s testing programme commences.

The innovative 10kW prototype began its test phase in mid-June and since then has completed 154 days at sea, delivering steady outputs of up to 5 kW and safe instantaneous peaks of 30 kW, and operating in sea states up to 2.3 meters maximum wave height [Hs max].

“This has been an immensely valuable period where we have been able to understand how our machine operates in real sea conditions and gain practical experience in operations including towing, installation, removal, and access at sea.

“We’ve been able to unmoor, tow and moor the machine multiple times, trial the use of solar panels on deck, send commands from shore, test power production and compare our results against our numerical predictions.

“This has given us tremendous confidence in our design – both in its ability to capture wave energy effectively, and also the way in which it dives below the biggest waves, enabling it to shed the heaviest loads.

“Of course, we have been able to rely on the expertise of a number of partners and subcontractors and would like to thank Wave Energy Scotland, EMEC, Blackfish, Leask Marine, the University of Edinburgh and Supply Design, plus many other individuals and companies who have helped us on our way.”

Next year, the wave pioneers plan to put the device to sea in Orkney again and will connect the machine to a subsea battery which will be used to power a remotely operated autonomous underwater vehicle (AUV) – with potential applications for oil and gas offshore operators.

The deployment and demonstration of the Blue X at EMEC has been funded by Wave Energy Scotland and supported by Interreg North-West Europe’s Ocean DEMO project.

“It is only through testing technologies at sea that we can demonstrate the real potential for wave energy to make a significant contribution to the world’s ever-growing green energy demands.

“The success of Mocean Energy underscores the merits of Wave Energy Scotland’s stage gate selection process which has fostered a collaborative cross-industry approach from day one.

“In the years ahead, we will see Mocean Energy scale up its wave energy convertors to produce future technologies with potential to help decarbonise the oil and gas sector and deliver grid-scale electricity.

“At this moment, the UK Government is actively considering implementing a ring-fenced market support mechanism for marine energy, which could enable Britain’s wave and tidal sector to take a global lead.

“Post-COP, it is vital Britain puts a ring-fence in place and uses every lever it can to support home-grown technologies which can create a net zero future.”

The Blue X manufacture and testing programme has been supported by £3.3 million from Wave Energy Scotland (WES) through their Novel Wave Energy Converter programme.

The Blue X wave machine was fabricated in Scotland. Numerous hardware and services were supplied by companies who have developed capabilities though the WES programme, including The University of Edinburgh who supplied their CGEN generator, Supply Design and Blackfish Engineering Design.